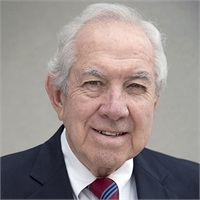 George Luhn started working in the insurance industry in 1958 with State Mutual of America. George then started his own insurance agency in 1979 named George M. Luhn Insurance, respectively, which was affiliated with Dunlap Insurance. Then in 1983 he partnered to create Luhn-McCain Insurance Agency. George joined WhiteStone Wealth Management in 2006 as an advisor.

George has many affiliations with various businesses and organizations in the San Antonio area including San Antonio Association of Life Underwriters, Million Dollar Round Table, San Antonio Country Club, YMCA and even was an initial investor in the San Antonio Spurs. George also graduated from the University of Texas at Austin.

Let’s Talk About You. Schedule Your Free Consultation Today.

Call Now
Back to the top